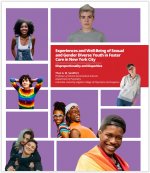 This is the first survey to report on the proportion of youth in foster care in New York City who are LGBTQAI+ and differences in their experiences compared to those of youth who are not LGBTQAI+.

The acronym LGBTQAI+ comprises persons who because of their gender and sexuality have specific needs and are treated differently than other persons, which might negatively affect their well-being. The letters stand for lesbian, gay, bisexual, transgender, queer or questioning, agender or asexual, and intersex. This survey was commissioned by the New York City Administration for Children's Services (ACS), which is committed to serving youth in foster care that are LGBTQAI+. The survey was implemented with generous support from the Annie E. Casey Foundation, the Redlich Horwitz Foundation, and the NYC Unity Project. This report provides the detailed findings from this survey.A separate document LGBTQ+ Action Plan produced by ACS identifies the steps taken to date to provide services and supports to LGBTQAI+ youth and plans to move forward in response to the survey findings. According to the survey: LGBTQAI+ youth are overrepresented in foster care. More than one out of three youths (34.1%), ages 13-20, in New York City foster care is LGBTQAI+. This is substantially higher than the proportion of LGBTQAI+ youth in the general population. LGBTQAI+ youth in foster care are more frequently youth of color.